Got permission from a friend for me to share this with y'all.

I'm sure this is old news to fellow  bloggers in the infertility/childless community-  just found out that a friend is pregnant. I was truly surprised since she had said she had no plans to get children- but then again that she said that a while ago.  Now she has a guy, things could have changed, and it certainly did.

My point here is...I'm running out of local friends who don't have children, and I'm getting tired.  I brought it up in a private online board with several friends that I have known for years.  I was admittedly whining about running out of friends because everyone are either pregnant or raising babies.


"Then why don't you get pregnant? You'd not feel left out- you'd be in the mommy club."    Someone (let's call her Marti) said that after I commented about the friend's pregnancy announcement. 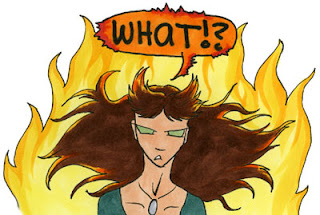 
I was visualizing myself fetching my baseball bat to go violent on Marti, when someone (let's call her Lisa) else pointed out, "If you had been an attentive good friend, you'd know that she can't have children."

I was gritting my teeth harder, and was going to lash out on my keyboard when Lisa said, "Where have you been when she had her surgery?"

"I know she had surgery, I sent her some flowers"  (liar, liar pants on fire, never got any flowers from you.)  Was cracking my knuckles, preparing to vomit fire on Marti.  (and yes I know I'm very visual- blame it on my reading comic books for decades.)

Lisa has to have the fastest fingers- she should try for the Guinness World Records.

"H-Ello!!!  She had a hysterectomy- which is not related to women's hysteria, (of course, we shouldn't forget that means you can get hysteria- you on Xanax yet?)  We're back in elementary school, let me educate YOU, hysterectomy means  removal of uterus- you know what uterus is, something to grow a baby inside-not the stork, not that you had paid attention to, but she had hysterectomy to save her life.  So how, you tell me, how would she have children if she doesn't have an uterus anymore? In her kidney?  Oh right, maybe she could get raped- all Akin said she could get pregnant if she gets raped.  Oh wait!  She ought get a non-lesbian to get pregnant for her, after all they say equal marriage would increase rate of abortion, so it's safer that way.   What? You didn't like what I said?"  Lisa tossed out on the board.

"You're cruel, that was absolutely unnecessary, you don't know me, so how dare you judge me? That really hurts"  Marti typed.


'NOW how do you think Jules felt when you said that 'you should get pregnant' and/or 'she has to do it harder?'  Think what you feel,  that's what Jules feels ten times worse right now, capisce?"

Nevertheless....  I AM running out of friends here in town that don't have children, and I'm not getting any younger.
Posted by Wolfers at 6:41 PM