I had a favorite mug,  red scarlet from the Fiestaware that I had gathered just in November and December '11 while going in and out of medical tests to see what was going in my uterus.   There is all the colors when one opens the counter; Emerald green, scarlet red, tangerine, peacock, cobalt, lemongrass, shamrock, plum, chocolate, turquoise, and and sunflower.  I intended to get only four plate sets.  After staring at the plates sitting on the counter, I felt I wanted more color in my life.  With the hospital tests and news whirling above my head, I wanted to keep the darkness away, by having more colors. So that's how I ended up with 11 sets, in all colors except for white and black. I joked to myself "I don't have an uterus anymore, but I have fiestaware in all colors!"  Bad joke, I know.

For a year and so, I have used mugs in variety of colors, but I found myself using the scarlet red mug frequently.  It grew to be my security mug. When I felt down, the red mug was there.  Dark clouds?  Red mug. Tissues and tears?  Red mug.  Comfort in solitude?  Red mug.   I did not really think about that until one day.

That day the red mug disappeared.

I didn't notice because I was using other mugs in other colors for a while.  In the mail, I got a baby shower invite last fall, so I opened the counter and stared at the empty spot where the red mug was supposed to be.   I pulled up mugs to see if the red one was hiding behind others.  No luck.

I got an orange mug to pour my tea in.    I sat in the darkness of the living room.  I stood up to go back to the kitchen. To check if the red mug somehow magically appeared.   It didn't.  I racked my memory to see if I had left it at work or in the car.  I checked the car, no luck.  At office, no dice.

That went for a few months- there'd be bad days, I'd open the counter to get my red mug and note its absence, to recall that it had disappeared somehow.  Using other mugs just didn't feel the same, despite the same taste of tea or coffee.

On one really bad day, I moved all fiestaware  (all plates, small plates, bowls and mugs, and servers) to the dining room, in an extreme move in my goal of finding that damned red mug.  I dug through the pots and pans.  I used reasoning of doing an audit of all my food for preparing for a zombie apocalypse, in an excuse to find that Red mug.

It was an unpleasant feeling- I lost something.  Like I lost my uterus.  Some friends.  My dreams of having children.  I failed to find this mug, and I failed in my tries to be a mother.  The emotions. I fled outside with my dogs in a pretense that it was time for their afternoon walk, never mind it was late morning.

That was last February, the first anniversary of the hysterectomy.

Now, it is May.  Yesterday, my neighbor came in to watch the dogs and let the A/C repairman in since the air conditioner wasn't working (we were roasting last weekend!). Cool air welcomed me when I came home from work. I was so glad; I went to bed much earlier last night. I hadn't slept well due to the heat, and the "leave-me alone" mood.

This morning I opened the cup counter....

Staring at the cup among the colored mugs, the red seemingly fierce in its pulse of color.  That's when I realized the neighbor had probably taken the mug when she was here for coffee last fall.

My feelings are quite chaotic and confusing about the return of the red mug.


All over a little red mug- go figure. 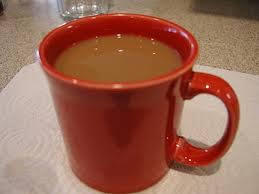