First of all, I'm alive!  No worries. :)   I have been very busy lately in the last two weeks, including volunteering or participating in some Derby events (I'll share some stories/photos later in future posts).  A friend had visited me for a weekend, and I have been hanging out much on my porch, doing a small garden and doing some labyrinth paintings.  Anyway...back to the subject.

Volunteered at the Zombie Run here in Louisville two Sundays ago-  handing out vaccination hydration...err. water.    There was a lovely team of volunteers, some dressed as doctors (I got to wear a lab coat!), and zombies, including two cute little zombies.  Spooky, although.     We had put out cups full of water, thinking it's all finished.   By the third group of runners coming by, we noticed numbers of cups dwindling, we realized we needed to whip out MORE cups and MORE water....  to be safe, we had put out 300 cups of water here on the first (water) stop! Later on, I found out we had 700+ runners. Wow!

That's when I found out we I love how runners involved humor on their t-shirts and/or costumes:

"Daryl's disciples" (Referring to The Walking Dead, in which there's a redneck character, Daryl..damn hot!)
"Tasty and Fresh"
"Lunch on the Run"
"Fast Food"
"Heroes of the Apocalypse"
"Who Got Brains"
"I like Big Guts"
"Zombie Bait"
and more!

There were zombies, with so many characters that I couldn't list 'em all...but I'll do my best... 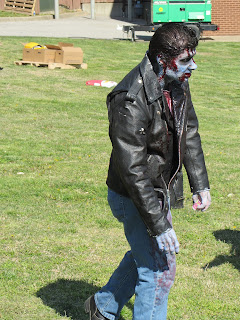 A hospital lost a doctor...what a tragedy...

housewife- would wonder how she manages to keep her curlers on...
(Courier-Journal)

There was this neat-o zombie, with several 'slashes' above and below her lips, so impossible to lip-read. That'd be a challenge for deaf or hard of hearing folks who rely on lip-reading... oh wait.. doesn't need to lip-read, just run in the opposite direction!

Here is a video by Thomas, who was volunteer press for this event, so you can get an idea what it's like being a runner dealing with a 5K run with obstacles (zombies and stuff they throw on the road).

This is right front of where our "vaccination hydration site" is...it's hilarious to see this zombie grab at some runners!  (Two little kids you see handing out the cups with water, were members of our team). They certainly stayed calm!  :)

I certainly had a blast of fun!!!!  I hope I'll do this again-   I know there'll be two other runs; Run for Your Lives, and the Zombie Stampede- so I'll find out when that'll happen here this year.

P.S.  For folks who might ask "this post is not about infertility"....it's certainly not.  I want to show that there IS life after infertility, childlessness, and that one can put grief and anger aside for a few hours, if not a few days.