And a bit of regret.

It had been very busy for me since the last post, especially with me attending a counseling conference last weekend (and take a note from me- *try* to take a day or two off before or after.)     Before I go on in this post, I got to tell you- I was flabbergasted to find that only one Deaf counselor (me) had showed up at that conference, among 3700 attendees.   Whatever.......

Although, I took a lot of workshops that I felt were necessary to pursue in my job, or would benefit my clients;  I chose one workshop for myself- "Regret and Forgiveness and Wellness." What grabbed my attention was what the presenters had written for purpose of this workshop: "Negative emotions can lead to a breakdown in all areas of life. "If Only" are the saddest two words in the world.  Regret weights a ton for those who shoulder it every day.  The process of this session will be to confront regret and learn the path to forgiveness. There is almost a magic as forgiveness allow guilt, sadness, shame, anger, or disappointment in self to fade."

The room was totally packed when I came in, so a guy was nice to give me his chair when he realized I had trouble getting on the floor (due to bad knees.)  It was then a realization that all of us have to be in smaller groups, to identify a regret, to expand on it if desired, what one can do about it and to let it go- well you get the idea.

When the presenters said to tell each other of a regret, I looked at the fellow members in group, and I had one thing on my mind. Many doubts flying around in my mind- "was this big? Not enough?  Too soon to say?  Would they understand?"  Realizing the eyes were then on me, waiting to hear if I'd share something forbidden, I burst out,

"I cannot have children, I should have gotten pregnant much earlier, that's my regret."

That said, I wanted to grab it back and say "you didn't hear that at all."  But no, that's out in the open.   I was both frightened and emboldened... crazy, huh?

I couldn't say more than that, but to say that by end of the educational session, I was thinking on what I had learned about myself:

I am still grieving, although it is changing bit by bit.
I am not ready to let it go at this time.
I need to forgive myself first before I could forgive others.
I need to follow the spiritual/emotional map destined for me on my own time, in my space; I cannot follow others people's maps in forgiveness.

And you know what?  I'm okay with that.

P.S. I had ordered the book, that was recommended in the session "Way of Forgiveness" by Patrick Miller. So that's something I'll read someday.... when I'm ready. 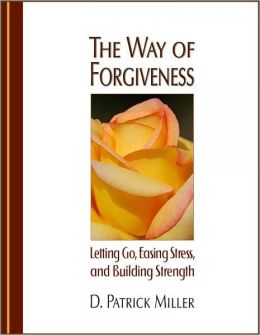