Due to a local cable/Internet service provider transferring to a bigger one, my Internet had been 'funny' for a week and half- I couldn't predict when I'd have Internet..one day it'd be up for an hour, then it'd be up for 7 hours after two days of no Internet.  After tolerating it for a few days, I gave up and decided to go unplugged for a few days.

The days ended up awesome!

Hiked in the swamp nearby-I had known it was there since I moved here 4 years, but never had the opportunity 'til now.  And.. I didn't get any mosquito bites, could you believe that?! 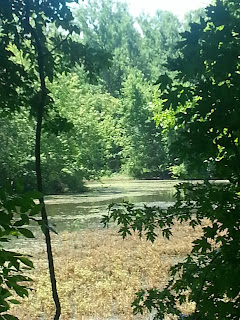 Walked the Big Four Bridge, that had been renovated from a train truss bridge to a pedestrian bridge- opened three months ago. Pretty awesome- can't wait to walk to Indiana when the other end is completed! 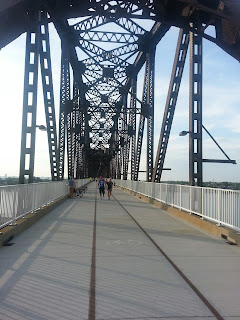 Art is one of my passions, so when I saw a guy starting to paint on a building wall, I stopped by and asked if I could watch the process.  Turned out this is for a center for survivors of domestic violence- to give hope and inspiration.  Watching the guy paint was magic in process- beat that, Harry Potter! 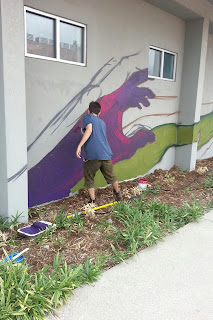 Rediscovering my love to crochet. 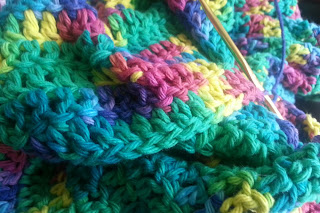 Exploring local restaurants, including the most loved BBQ- Smoketown U.S.A (would you believe the owner/chef originally came from Russia?) Very friendly, he chattered on and on with us despite we didn't understand each other. That didn't stop him from checking with us, encouraging us to eat more- and was happy to give me one of his cakes he made personally, turned out to be orange soda cake. I hadn't tasted orange soda since I was a child. What a memory trip, for sure!  There was a whisper of a new breakfast cafe, it's not yet known. So I went exploring at SuperChef's Breakfast, and saw that they had red velvet pancakes.  !!!  I had to try that...and you know what?  DIVINE! 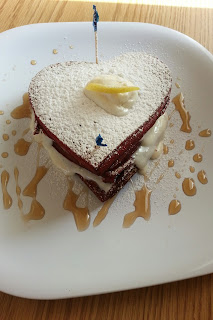 On my bucket list, there are museums that I aim to attend, but hadn't "the time to go" 'til now. I attended the Vent Haven Museum (the only museum in the world about ventriloquism).  I can say safely, it's SO creepy!  The wooden faces, eyes following your movements...but AWESOME!  I also went to the Underground Railroad Freedom Center- very sobering but good way to increase awareness of slavery in United States (1619 to 1863) and about today's slavery (forced labor, child labor, prostitution, bonded labor, and trafficking). 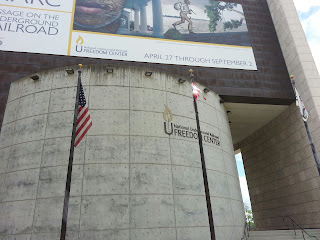 There were some rainy days (including one flash flood warning, which indeed flooded the bridge just down the road from where I live).  I managed to go there to check, and I saw a muskrat, first time in my life!  I love animals, hence biology and zoology are another passion of mine. Another moment of awesomeness!    Anyway, due to the rains, I couldn't go outside much. No fear! Books called!  The book pile had grown, and grown for months, and I couldn't make a dent in it 'til now! 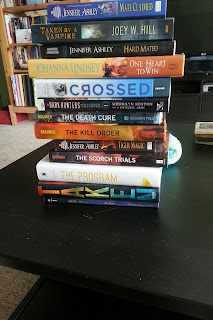 There is a young neighbor with a 4 years old boy-  Some months ago, I had lightheartedly offered to babysit the boy if the mother needed a break or something- and she hadn't taken up on my offer 'til now-  a rainy day, of course when I couldn't take him out!   We ended up painting,, drawing and making oatmeal cookies (with chocolate chips- he wanted 'em). Later on, he stopped by and gave me this sweet note. 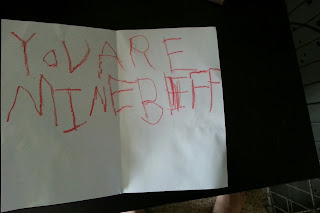 Those days were certainly to savor, being mindful and staying in the moment.    And best of all, at no time, were there any inkling of being aware of infertility, or being childless.

That helped me realize something-   I had stayed on Internet overmuch for a year and more- to escape into the world web, nursing my wounds, with the word "INFERTILITY" in red on my forehead. Don't get me wrong- I'm very thankful for the blogs, especially some dear bloggers who are now my friends- but hey, did you know that when I finally got back online, I saw I had 68 unread posts on Bloglovin'?

At first, I felt bad about being behind in reading, and then it drew upon me, many bloggers have their lives- some are traveling right now. Some are writing a book or developing toward an infertility documentary.  Some are doing DIY crafts- or cooking new dishes. Some are dating.  Some are raising their children and debating about dishwashers. In other words- they have their lives that are not revolving around Internet.  And the days without Internet showed that I can survive just fine being offline, and that it's not the end of the world.

So in mind of that, I'm looking into camping, hiking and fishing at some parks nearby, including Mounds National Park in the state next to Kentucky.   Making more dents in the book pile.  Making blankets and crafts, now that some neighbors noticed me crocheting, some had asked if I could make them blankets.  And hanging out with some friends, including some in other states.    And it's okay to be offline for a long while!