There are some tattoos on my body, each one having a significant meaning to me.   Nevertheless, there is one tattoo I cherish all above others...

You see, I was in a relationship with someone back in Maryland several years ago.  By end of a few months, I was planning to break up with him due to verbal and emotional abuse.  I noticed my period did not show up in October.  I put that off to stress, especially with the guy and crazy hours at work.  By November, I was starting to wonder if I was pregnant.  I was experiencing some symptoms; nauseous (especially with some smells!), very sensitive breasts, and I had some severe headaches, beside missing my period for two months.

I was swinging forth and back between telling him, or seeing the doctor first to see if I was pregnant.  I was starting to bite my nails, wondering what to do if I was pregnant.  Was I ready?  Did I want the baby, especially with who the father is?  If I wanted to keep the baby, did I have enough support?  Would my family accept the baby?  So many questions running through my mind.  But I knew something, perhaps it is my chance to have a baby of my own.

One day after Thanksgiving, my dog alerted me to someone knocking at my door.  I opened it to see a very pregnant pretty woman.  She stared at me as I stared at her. Well, to make the drama short, the guy who was already at my place had to restrain her, after leaving bruises on me.  She made it very clear, by shouting, "I'm his girlfriend, this is his baby!"

You can imagine how flabbergasted I felt, stunned, shocked, dumbfounded, then betrayed,....and then relieved.  I told her, "you can have him back- I don't want him." She kept cussing at me, telling me that I stole him. Refused to listen that I did NOT know about her, nor her pregnancy/baby. NO one had told me about her.  I had absolutely no clue, and I felt angry at him but relieved that he can be out of my life. I turned to him, and told him, "Leave.   I don't want to see you again."

"I'll talk with you later, we'll talk about this."  He said

"We have absolutely nothing to talk about.  Out of here or I call cops."

He left with the very pregnant woman, belittling her all way to her car.


I was numb afterwards.  I had one thought, "What am I going to do?" as I petted my stomach.  A few days later, I decided- best thing is to find out if I was indeed pregnant- I called and set up a doctor appointment.

Two days before the doctor appointment, I noticed I was starting to spot.  I experienced cramps, and I started bleeding heavily, unusually heavy.  A friend stopped by, worrying about me since I did not reply to her calls.  She saw me, and said "we have to take you to the hospital. You're very pale, white really."


At the hospital, they checked.  I was indeed pregnant.  And I was having a miscarriage.


At the doctor's recommendation, I had a D&C, so I'd not have to suffer for a week, waiting it out.  I did not tell anyone, not even my best friend.  I did not want pity, or drama especially if this could have been passed on to the ex (especially with his pregnant girlfriend).  I just felt that if it was known, people would say, "she deserved it, she made him cheat on his girlfriend" or "God made it so because of the sin." There were a lot of folks that are like that that I knew.  So, I stayed mum.

I named the baby, that the only gift I can give.


Several years later, I had this haunting image in my mind over and over, of a sleeping wolf cub. I wasn't sure why- it persisted.  I also found myself mesmerized with Luna moths, their wings, the eyes on their wings, the symbol of them- ease of movement in darkness/shadow, fertility, transformation, ability to find light in darkness. But I still wasn't certain why I found the wolf cub and Luna moth as an obsession.

During graduate school, I got a very strong urge to do something- but what?  What to do with the wolf cub?  Luna moths?

During a weekend, I went to New Hope with a dear friend.  We walked by a tattoo parlor, Living Arts Tattoo, and I saw beautiful tattoo artwork. 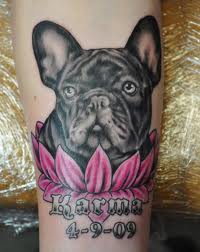 I suddenly knew what I had to do.

Back home, I gathered photos close to what I have seen in my mind, of a sleeping wolf cub and of Luna moths.   I brought them back to the parlor.   I asked the artist there, is it possible?

He sent me a draft of the tattoo, by email a few days later.  I saw it, and I had tears in my eyes.  I was overjoyed.  I was sad.  I was excited.

I came to the Living Arts Tattoos with the friend, who wanted her old tattoo re-made into something else, a very beautiful flower.  Anyway, they asked me where I wanted it done, and I said, "behind my  right ovary area."

I would be a liar if I said it wasn't painful during the tattooing process.  There were moments I was tempted to say "Stop! Stop! No more!"  But I kept on; this pain is temporary, I told myself.

The artist was done, and he did great- but I was very much dazed by the pain.  The friend who came with me said the tattoo looked great, beautiful.  I just wanted to go home and see it again, without an audience.

In the privacy of home, I peeled the bandage off, and stared at the tattoo. 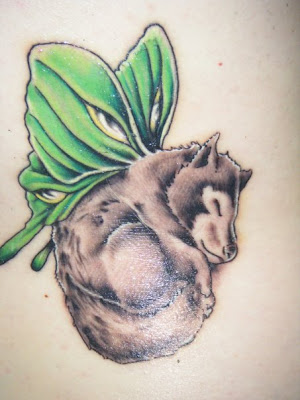 I wept.  I felt the spirit of the baby close, and I knew that's what was needed to be, for me to remember him in my way and in my heart, out on my skin, nearby.

first photo is from http://livingartstattoo.tumblr.com/
second photo is mine, you cannot copy it without getting permission from me.